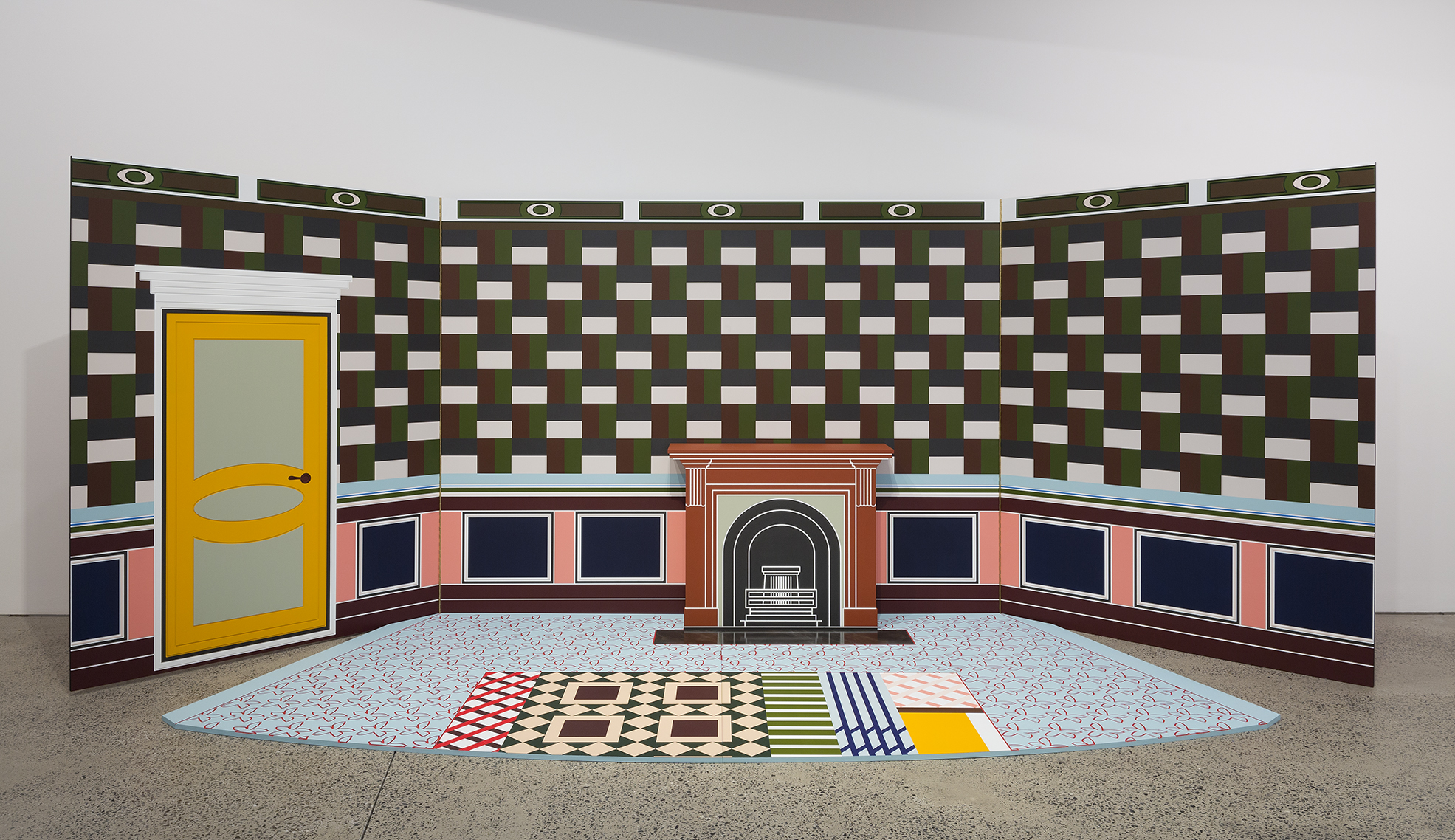 How to decorate a dump,

Esther Stewart (b.1988 Katherine, Australia. Lives and works Melbourne, Australia) creates paintings and installations that examine the endless possibilities offered by the visual language of architecture, design and geometry. In her hands, the axioms of Euclidian geometry result in new and utopian interiors that are both impenetrable and inviting. Stewart’s practice makes use of paintings, carpets, flags, screens and sculptures in her construction of architectural experience, establishing a space between form and function, art and design. Stewart’s hard-edged geometric abstractions invoke a complex genealogy of historical references, simultaneously calling upon the techniques of Islamic mosaic, Russian Suprematism and Constructivism, and Neo Geo & Memphis Group design from the 1980s. This extensive visual vocabulary is harnessed to describe a unique fictional space that references different ideas, times and cultures to construct new work. Working at the nexus of art and design, Stewart explores ways to reimagine, collapse and expand spaces through painting and architecture, while examining these historical influences and the social and political implications they offer. Recently, Stewart has collaborated with architects and craftspeople to extend the spatial and material possibilities within her practice.

In 2015, Italian designer Valentino engaged Stewart to collaborate on the translation of her paintings into the Autumn/Winter 2015-2016 menswear collection. This very successful collaboration illustrates Stewart’s ability to push boundaries and play sophisticated games with the elastic relationship between art and design. In 2016, Stewart was commissioned to produce a new wall painting at Bendigo Hospital, which made use of her hard-edged painting compositions to re-contextualise the interior architecture of the building. Stewart subsequently completed another ambitious wall mural as part of a major residential redevelopment in Sydney in 2017.

Esther Stewart completed a Bachelor with First Class Honours at the Victorian College of the Arts, Melbourne in 2010, where she now lectures in the School of Sculpture and Spatial Practice. She is represented by Sarah Cottier Gallery, and recently exhibited new work in a solo presentation at the Melbourne Art Fair 2018. Her work has been exhibited nationally and internationally at galleries and art fairs, including at the Heide Museum of Modern Art, Melbourne and the Australian Centre for Contemporary Art (ACCA), Melbourne. In 2016, Stewart was the winner of the Sir John Sulman Prize at the Art Gallery of NSW, Sydney.